With little time for writing these days, I have been editing or working with editors (to be more truthful).  Love Struck, is a contemporary romance story. While the book is being edited and structurally worked on, my friend Constantinos Karentzos has been busy.

This is what we have finally decided on.

Please let me know what you think.

As some of you know, The Runaway Schoolhouse is in print and on kindle for the past few months. (The first few pages are here on this site for you to read, if you like).

I believed, foolishly, that this achievement was 9/10’s of the job done.

I was wrong. It is the first step.

I have received much help, thanks to all who have offered advice and support to me. And I have learnt that in today’s world. a writer has to become a Jack-of-all-trades. The greatest hurdle is Marketing and in this I thank Emu Ink.ie and Laurence O’Bryan, the founder of BooksGoSocial.com

But I still have to spend time, marketing the book. I have also been told that book reviews are gold to writers. Hence the Giveaways and the pleading or requests for reviews on Goodreads and Amazon etc.

I have given away 15 books, in the hope reviews will result.  But I am curious as to how other children’s writers find book reviews. So any help, or advice will definitely be appreciated by me.

Blogging delights me and writing is a passion. I consider myself lucky if one or two people read a post and am amazed if the stats alert me that a post is doing well and 15 + readers have been on my site.

Life is funny isn’t it, some of us dream of winning the lottery but bloggers simply dream of being acknowledged and read.

As promised here is a sample chapter of the book aimed at children of 7 years plus.

John and Sara Buggy were twins who didn’t look alike. They didn’t think or act alike either. In fact, they were complete opposites. Sara was a quiet, studious type while John was a messer who hated school and spent his days there playing practical jokes.

One blustery, grey Monday morning, they trudged their way to school, all set for another run-of-the-mill day in the tiny two-classroom building.

“Why are we walking fast?” Sara asked John.

“I have something to do,” he replied, with the beginning of a smile tugging at his mouth.

She knew that look but instead of pressing him further, concentrated on stretching her short legs to keep up with his longer stride. There was a six-inch height difference between them and while John had a head of smooth, dark brown hair Sara was stuck with a headful of tangled, red curls. This didn’t sit well with her.

“School is the oddest place because most of what we learn is pretty useless in the real world,” John was saying, as they walked through the main door.

Sara considered her answer for a moment.

“You may think you’re right but I like learning new things and it’s always so cosy in here.”

Once they were seated,  Sara started to worry about what trick John was about to play on their teacher. Mrs Brown, she noticed, kept sniffing and clutching a hanky to her nose. Sara wondered if she were ill. She glanced at John who winked at her.

“Not long now,” he whispered.

“What have you done?” she hissed.

Suddenly, Mrs Brown sneezed. John giggled. Sara turned her attention back to their teacher who sat in her chair with her nose twitching like a rabbit. She sneezed six times in succession, sending her glasses bouncing onto her desk. She managed to stop long enough to hold her nose and shove her glasses back in place. Getting up from her desk she walked to the door and said very quickly, “Carry on with your maths.” This short statement was followed by more sneezing as she left the room.

John was given many high fives and claps on the back as his mates asked how he did it.

“A master never reveals his secrets,” he grinned.

Sara was not impressed. “Someday Mrs Brown will get really mad at you and…”

“And what?” John demanded. “Writing a hundred lines is nothing I haven’t done before. Now, come on, it’s break time.”

Suddenly a shadow fell across his desk and Mrs Brown said, in a sharp tone, “Let’s try five hundred lines on the blackboard today John, not on your tablet where you are a master at copy and paste. The line, I should not play pranks on the teacher, is to be written at lunchtime.”

Mrs Brown then turned to Sara adding, “And John is to do it on his own.”

At lunchtime Sara slipped back into the classroom to help her brother, but found him staring at the blackboard.

“You haven’t written many lines,” she said.

Sara noticed a message written across the board – and it wasn’t in John’s handwriting.

School is a useful tool for life, John and Sara.

Sara read the words aloud and looked at John.

“I didn’t do it.The board was clean when I began and then it just appeared. It’s wrong anyway, school is stupid.”

He wiped the message away.

“Perhaps it is magic?” Sara said in a wistful tone.

“Huh, there is no such thing,” John sneered. “If there was I would click my fingers and the whole board would be full of lines, just like this.” Turning to face Sara he clicked his fingers but noticed her smile fade as she pointed back to the board.

There before them, more lines of the same sentence appeared. They watched as they scrawled, with no sign of a marker, in neat, tidy rows.

“There are twenty rows of twenty-five lines.” She looked at John. “Did you do this? Do something else!”

“Two packets of crisps,” John shouted, then clicked his fingers and waited. Nothing happened.

Sara was busy staring at the blackboard again. She read the message aloud.

You have enough lunch to eat in your schoolbag.

“I don’t like this. Is it a ghost? ” Sara whispered and jumped further away from the board.

“I wonder why it happened today?”The words changed and she read aloud, Today is my birthday, I am one hundred years old.

Gathering all of her courage Sara said,  “Happy Birthday to you but who are you?”

I am the schoolhouse you are standing in and my name is Clearie.

The words on the bottom changed once more and they both read the message.

Suddenly, the ringing of the bell announced the end of break. The arrival of the other children back into the room prevented Sara and John from finding out more.

Sara did notice the last message was wiped clean before Mrs Brown arrived back to her desk but she instinctively knew  it wouldn’t be the last of them.

In the meantime, there was John’s lack of lines to worry about…

Copies of the book can be purchased via http://www.emuink.ie

This company also offers a unique book rental along with the usual, Kindle/e-reader and printed copies to buy.

I am truthfully hoping I can get some reviews as feed back is how we can develop and change as writers.

Thank you all and have a great Christmas.

I am in a panic and not even The Bob is calming me. My children’s book is being launched tomorrow night. I will put up an short piece from it for my few followers, thank you all.

But for now, here is the cover of the book. It is aimed at children of 7 years and upwards. This schoolhouse was bored and …ran away. 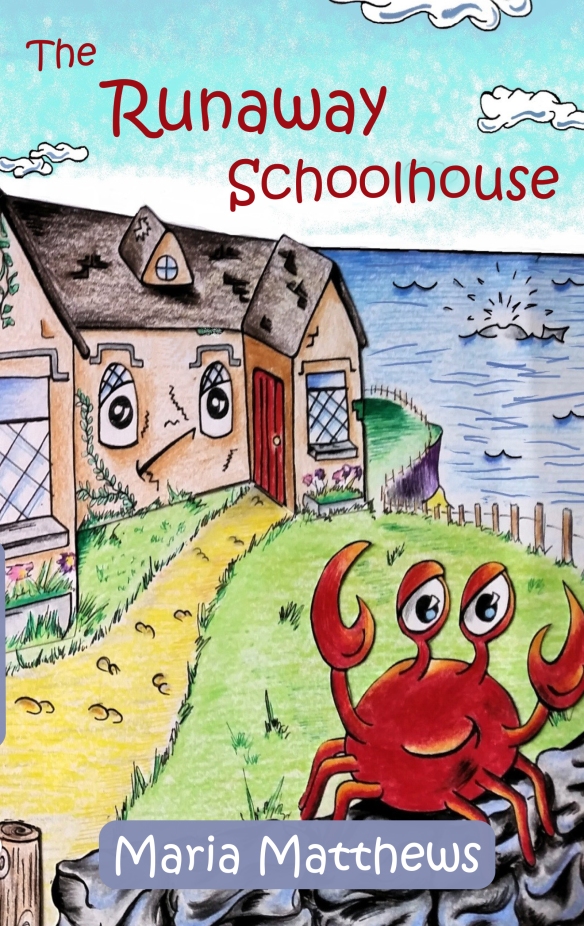 I don’t understand why people are so taken with cats.

They don’t chase balls or fetch stuff. They just lie around and moan a lot. I’ve tried explaining we don’t need them as I catch the mice in this house, two so far this month and winter is not even here yet.

Maybe someone can explain the fascination to me but here is a sketch Maria did a while back of one breaking his way into the house.

Tired after a late night / early morning I resorted to cleaning out a file and found this, a sketch of my husband and daughter. They were always close from the get go. If he was fixing a car or truck she was by his side handing over the necessary spanner, parts etc.

And some twenty years later though it has changed a little, as life dictates, they are still great buddies.

I heard the Ogre thinks I am not bright, well check this out: 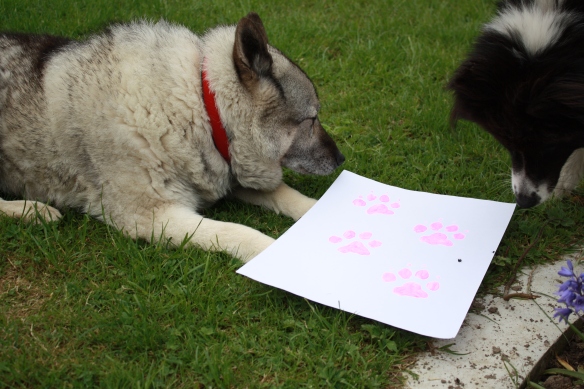 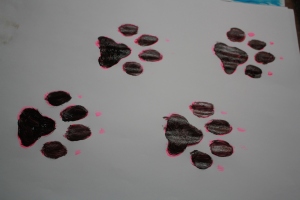 And it is only the begining, Doris thinks I will achieve new heights, with my artwork.

What do you think?

“Breeze, its a weird name. How did you get it?” Tulip asked one afternoon.

He smiled. Flicking an annoying squirrel off the branch they sat on he said, “To answer that we need to climb Sugar Loaf mountain.” He pointed into the distance.

One hour later they were sitting on a ledge looking down on the forest. “I can’t see our tree.” Breeze moaned.

“Let me help.” Tulip flicked her wand towards the trees. She said, “Wait, give it a minute.”

Breeze counted. At sixty he was rewarded. A rainbow volcano erupted from a tree, showering the forest below with sparkling, dancing lights. “Thanks,” he said and began his story.

Mum was nursing me outside our cave, the day after I was born. I was crying. Two birds flew close to her and asked her to make me stop. Then they asked, “What is his name?”

“He doesn’t have one yet, because an Ogre takes his name from whatever or whoever makes him smile, but he hasn’t stopped crying.”

“We know,” they said putting their wings over their heads.

A breeze blew softly across the mountain tops. It drifted down to the crying baby. It danced across his toes and worked its way up to his nose. His crying stopped. He smiled.

The birds popped their heads out and asked, “who did it?”

She said, ” the breeze did it. His name is Breeze.”

Tulip looked at him. “I don’t think that could be true.”

Suddenly she felt a flitting breeze tugging at her wings. It pulled her hair from its pony tail, tickled her nose. She smiled.

But Breeze was way ahead of her as it worked its magic on him and he laughed so hard he rolled half way down the mountain.

For an image of Breeze and Tulip check out this link

I was looking out for helicopters, while Ellie snoozed

And I spotted the most amazing stuff,